Can Virtual Reality enhance our education?

“VR/AR will prepare students for Industry 4.0”; “Engineering education cannot keep up with the pace of change in technology”; “We don’t know what the implications are of VR/AR technology on teaching and learning”; “VR/AR is the next frontier in education”; “Teachers are known to be skeptical about the value of VR”, and “Placing avatars in a scene to interact with the students poses a formidable challenge”.

These are just a couple of statements I collected from a number of papers and articles I read about the use of Virtual and Augmented Reality in education. Every time I immerse myself in a virtual reality or watch a demonstration of VR technology I am engaged and fascinated by the amazing possibilities and rapid developments. Call me an average layman in this area, I summarise the above as follows:

“There is little doubt that VR/AR engages and stimulates the senses of our students. But does it improve learning?”

The day was kicked off by inspiring keynotes by Pierre Dillenbourg, professor of Learning Technologies at EPFL in Lausanne (Switzerland) and Head of the CHILI Lab (Computer-Human Interaction for Learning and Instruction), and Max Louwerse, professor Cognitive Psychology and Artificial Intelligence of Tilburg University, and head of the Mixed Reality DAF Technology Lab. 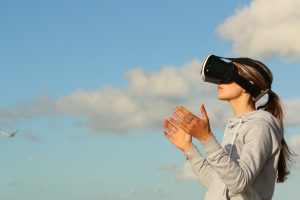 Dillenbourg discussed the fit of VR/AR technologies with education and the relevance of VR/AR for better learning gains. His presentation had the title “VR/AR/AW“, where AW stands for “After Wow”.

Louwerse addressed the difficulty of moving education to implement this new technology. Particularly engineering education has been reluctant and slow in accepting new technologies for learning. He stated firmly that the magic of VR will not come from the computer scientists or software developers but from the users. Teachers in academic education find it scary, want to understand the possibilities and need evidence first. But the only way to discover  what works is to experiment, measure and reflect. And so we should not be overly optimistic.

What is VR about and what can we do with it?

Dillenbourg summarised the attractiveness of VR/AR as follows: It can show, demonstrate and immerse people in phenomena that otherwise cannot be shown or experienced. In brief VR is about:
• Making the invisible visible
• Making the impossible possible
• Making the complex simpler

Louwerse started his presentation by asking why we still don’t have the answers why students like playing games but don’t like going to a classroom, why society has so much changed but the educational system has not, and why people like to be engaged in dialogue but students do not like to be talked to. Is it the lack of engagement, and could VR technology be the solution for all this?

VR/AR is increasingly used in industries

The professional work environment increasingly uses VR technologies. Its motivation are multiple: lower development cost due to virtual prototyping, faster and better design decisions, higher precision, better product quality, and the use of digital twins that allows the analysis of a product’s current status and performance over its life cycle. The technologies empower new creators on the market such as game developers and movie makers. VR could transform into an Ultimate Empathy Machine that uses a new grammar for storytelling and emotions (travel, museums). Since most advanced experiences with VR/AR  are in industries, the universities should use their relationships to extend their view on how the technologies work in engineering practice. 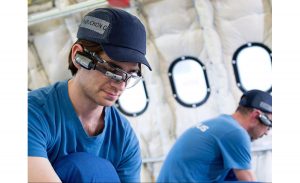 Airbus has developed “connected glasses” for technicians to wear on the A330 final assembly line. The glasses enable precise positioning (Source: Airbus)

A Goldman Sachs report forecasts that creative industries using VR/AR in gaming, live events, video entertainment and retail will grow to a $95 billion market by 2025. Learning technology plays a negligible role and is not mentioned at all in this forecast.

How can the development of VR technology for education ever catch up with the rapid developments in the game industry, knowing that the Millennial generation of students is very much used to high-performance games? As I have suggested in previous blogs, I expect it will be the students who will be the change agent. They will choose what education fits best. We should therefore involve them actively in the development of the future educational landscape.

How do we know what works in education?

There is still little evidence about the benefits of VR/AR in engineering education. Little is known about the perceived value for the students or the teachers, or what the consequences for the organisation are. The workshops showed experiments where VR/AR in the classroom are applied to support the understanding of complex concepts through interdisciplinary collaborative work environments that cannot easily be re-created in the physical world. Where teachers use it to expose students to real-life learning situations beyond daily reach. Various experiments were addressed to increase memory recall, enhance performance in complicated social and engineering skills, and stimulate creativity. Obviously VR  is not a solution provider but an enabler.

The keynote speakers as well as the workshop producers tempered the expectations. History has shown that most ICT technologies have thoroughly changed society but not yet fundamentally changed the educational landscape. Many big implementations of ICT in education have failed. Most participants therefore do not a expect a VR revolution in education in the short term.

What do students and teachers need to learn about VR/AR?

It is a very different question how teachers could use VR in their education to support learning, for instance in the training of professional collaborative and interpersonal skills?

What have we learnt so far?

In the keynotes and workshops I heard three interesting paradoxes: There is no doubt that VR technologies engage the students. We all know that deep learning requires student engagement. In VR engagement is achieved by immersion. But, as Dillenbourg pointed out, the immersive experiences in the virtual realities may lead to such strong engagement that students make decisions impulsively without rational thinking. He made the statement that we may even have to disengage students to achieve thoughtful learning in a VR learning environment. Evidence of engagement levels may be measured by eye tracking, intonation, gesture, position in space and brain activity. And so, Louwerse told us, in the near future personal behaviour measurement in the classroom might guide for personalised learning paths.

Most of us believe that learning is related to the media richness of the study material, Dillebourg said. “The more similar it is to face-to-face, the better it is.” We always want more and better. But does that help? Movies are not always better than pictures, video is not always better than audio, and 3D is not always better than 2D. The VR hypothesis is that “the more similar it is to reality, the better it is.” But, as Dillenbourg explained, if VR is close to reality but not close enough, a lower fidelity may do a better job. This is known as the “uncanny valley”. The level of fidelity required in a VR environment depends on what we need for learning, and this is not a trivial problem. Lower levels of fidelity require imagination by the students!

The higher the cost of a VR solution, the lower the genericity of the solution is (Roy Damgrave, University Twente).

Students using VR applications have to reflect and predict, explain, justify, reformulate and compare intermittently in order to achieve learning. Immersion is not enough: they gather an abundance of information but don’t learn effectively. Learning remains mainly a cognitive effort, and engagement by immersion can only partially influence. 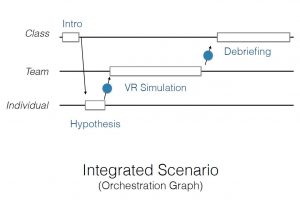 The impact of the social dimension in learning, also in a VR environment such as collaboration with peers and teachers, should not be underestimated. Optimum learning is achieved by integrated scenarios of lecturing introductory knowledge in the classroom, individual work to develop hypotheses, followed by team work using VR simulations, completed by a debriefing in the classroom. Effective learning is all about dynamics, creativity, interactivity and feedback, and diversity. This approach is further explained in Dillenbourg’s book “Orchestration Graphs – Modeling scalable education”.

Experiments in Tilburg University and University of Twente have shown positive experiences in Mixed Reality Labs where students are partly immersed in a virtual environment but remain aware of the physical environment and have face-to-face contact at the same time. Students and teachers dislike the use of Head Mounted Displays and other wearable VR instrumentation because it is distracting and prevents people from acting normally.

Interaction between human and intelligent machines

Louwerse mentioned that it is the interaction between the human being and the intelligent machines that will determine progression of emerging technologies:

The above statements do not only apply to a VR/AR but to technology and engineering as a whole, and describe their impact on society and our engineering educational programmes.

Provisional experiences in Tilburg University indicate that VR/AR simulations pay off more when applied to abstract statistics and schematics than when simulating system designs, constructions or physical phenomena.

In the workshop about the Virtual Reality Lab and Smart Industry Lab at University of Twente, Roy Damgrave demonstrated how they integrated VR in their curricula as a trigger for discussion in distributed teams, as an expression for creativity (daring to try new things), and as a try-out of the future. He mentioned a number of challenges of VR in education: The teacher has to lower the threshold for the students and communicate that they don’t need that much ICT skills to use VR. It is not the development of VR, but the use of VR that is assessed. Students have to see the benefits and potential of VR before they decide to use it.

VR/AR technologies will impact education profoundly but slowly. They engage and motivate young people, but the benefit is only an advantage for learning if the activity is well aligned with what is to be learned. We have to discover what works in engineering education by experimentation.

VR is no magical box. It’s a means to an end but not an end in itself. It’s a tool and not a solution. The magic of VR will not come from computer scientists and software developers but from the users.

Tilburg University builds the Mind Labs where minds, media and technology will meet. Soon we will have intelligent avatars who will respond to questions and behaviour of students. October 16, 2017 the 7 million euro VIBE project (Virtual Humans in Brabant Economy) got approval. The project will develop avatars for training purposes. The avatars will learn natural conversations, human characteristics, with spoken input and output, and may serve as virtual intelligent assistants who enable more personalised learning.

Enjoy reading and share: the more you spread, the more I'll write and you'll read.